Between 1948 and 1958, he was into trading anything and everything, according to Yashwant Marathe

The Story of Appasaheb 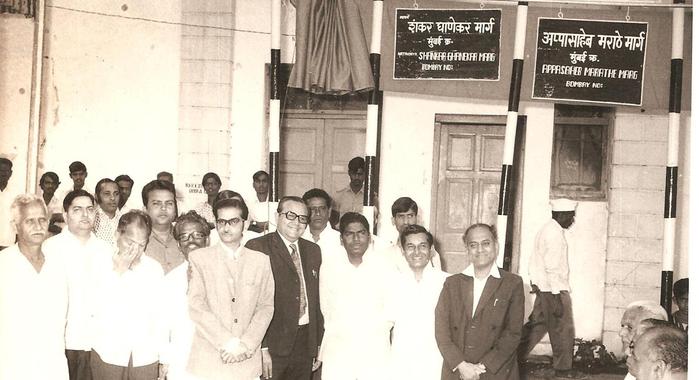 Appasaheb Marathe Marg is a prime commercial location in Prabhadevi, but it wasn’t always so. The stretch of road between Jakadevi Chowk on Gokhale Road and Babasaheb Worlikar Chowk on Annie Besant road in Prabhadevi is named after Sakharam Purushottam “Appasaheb” Marathe, a Marathi Brahmin originally from Vengurla in Konkan. A chance leasing of land owned then by Portugese Church, Dadar, led to a legacy that lives on three generations later. Appasaheb Marathe was born in 1911, in a small town near the Goa border. He came to Mumbai in when he was nineteen years old and began to work for P Shah & Company, a trading firm. When the company opened a branch in Karachi, three years after Appasaheb joined the firm, he was offered the chance to go to Karachi. Between 1934 and 1948, Appasaheb worked in Karachi, eventually opening his own business (Sind Pharmaceuticals Pvt. Ltd.) manufacturing shark liver oil as there were plenty of sharks in the Karachi coastline.

In 1947, when partition took place, he tried to stay back for 6 to 8 months, but heeding the advice of his Muslim friends of a bleak future in Karachi, he returned to Mumbai in February 1948, with almost nothing. Between 1948 and 1958, he was into trading anything and everything, according to Yashwant Marathe, grandson of Appasaheb. In 1959, he started a mechanical workshop near Bandra manufacturing auto-components for Telco and Premier. Around 1960, he chanced upon information of land available for lease which was owned then by Portuguese Church in Dadar. “I think the most significant things about Appasaheb was that he was good at getting along with anyone and everyone, and that he was a risk taker. He heard about the church-owned land. What were the chances of them leasing it to a Marathi Brahmin family? But he took a chance, saying that the worst that could happen was that they would tell him no. He was alright with hearing the word no. He was successful in getting the land on lease for 99 plus years” says Yashwant Marathe, grandson of Appasaheb. “Till the early 1970’s, the road was just a small path where maybe two people could have walked side by side, or one car could have squeezed by. The area was also very cool. I remember early mornings when fog would form on my breath when I spoke. Everything has changed now, only I am the same” laughs Subash Mayekar, 65, who has lived in the area all his life and has owned a tea stall there for the last 30 years.

“Around 1972, the road was planned and the municipal corporation at that time felt that since Appasaheb was a pioneer businessman in this area, the road should be named after him. Frankly speaking, if the road was a primary road at that time, it would have probably not been named after him. It remained a small one-lane road till around 1978, when the slums and other unauthorised constructions were cleared off and development started happening. That was when it became a one way street. Between 1980 and 1995 the road has seen huge development, with major commercialisation. Now Appasaheb Marathe Marg has become a four-wheeler showroom hub” says Yashwant. Except for Standard Mills and a few slums, the area was mostly jungle when Appasaheb leased the land. He built the Marathe Udyog Bhavan building on it in 1964, and used it for manufacturing auto-auxiliaries. After his death in 1969, his son Suresh Marathe, began to manufacture offset printing machines, a pioneering effort in India. In the early 2000’s, when manufacturing in Mumbai became costly, the family manufacturing business was moved to Nasik and the building was modified to house offices and other commercial activities. The building is now managed by Appasaheb’s grandson Yashwant, who says, “I am one of the few lucky people who has the same name and address".

Tanvi Shenoy is a student of NSoJ and is an intern with Indian Express, Mumbai