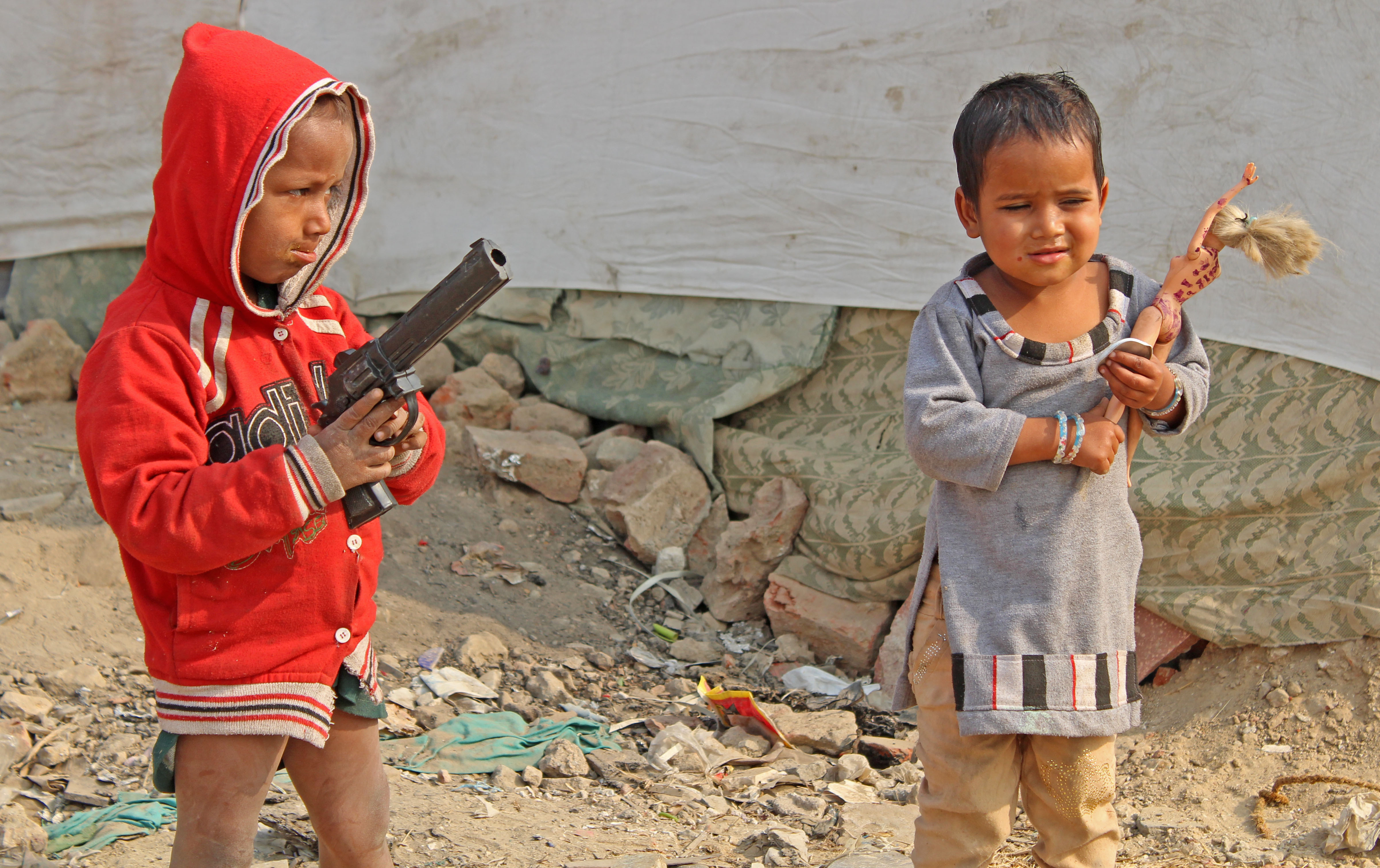 The Rohingyas have been in the global headlines since few years. Considering how close their main homeland of Rakhine state is to India, the Rohingyas had to flee persecution and come to Bangladesh and India seeking refuge. Their plight in India tells a different story. Some of them have moved as far away from their homeland to places like Chennai and Bengaluru. There are many Rohingya refugees in Delhi and some of them have identity papers issued by UN and other agencies. But a good number of them are forced to eke out a living in horrid conditions fearing arrest and physical violence. NSoJ student journalist Sanjana Surbhi travelled to the camps in and around Delhi and reports on the Rohingyas and the bleak future they face.

"Aapi, why everyone clicks our picture. Do you show it on cinema," asked Asad Ahmed who is only five-years-old. I was not sure how to answer his innocent question. So, instead of answering his question, I asked him about his school and family. This is the best thing about kids, they talk a lot. He recited some of his poems and was proudly showing his broken toys and introduced me to some of his friends. He took me to his house, a small structure with few holes from which one can easily watch sunrise and sunset. Rats and insects were moving inside that house. I was scared at first and I had a strong urge to get outside as soon as possible. Asad was busy finding his notebooks, bag, and other trinkets. I could see how he was unaware of the fact that he does not belong to this state or even this country. I was observing the surrounding and all of a sudden I heard a voice coming from outside calling Asad. The voice was of his father. He had a small kirana store attached to his house and that was the only way of his earning. He came to India in the year 2012 after being driven out of their home in Rakhine state of Myanmar.

In parts of Delhi with some fifty odd Rohingya families, they all stay in an isolated area at Kanchan Kunj near Kalindi Kunj and some of them who came in the year 2016-17 lives at Shaheen Bagh in Okhla with some poor Indian families. One cannot make out the difference between the refugees and the Indians. Everyone calls it camp They had made their houses with very basic things including old clothes, sacks, plastic, polythene and metal sheets, wood etc. Even in a conversation with Ipshita Sengupta, Policy Associate, UNHCR, India, she emphasized on the fact that UNHCR, India does not provide any camp facility due to financial problems. We sometimes provide them food and clothes but right now we are not able to provide any employment opportunity. She also added that these refugees don't have any birth certificates or any national identity proof cards. They all are illegal immigrants but now they have provided them with UNHCR identity cards which are valid for a particular time period and later they need to renew it. This the only identity proof they have.

Asad's father showed me the UNHCR's card that is provided to him. He offered me tea and some snacks and he stated that"Every day some people use to come with their camera and ask questions. Not all but some news reporters are very blunt. They secretly click our pictures at times. But some of them genuinely listen to our stories and takes it to a larger audience." He narrated his story and told me, how in Myanmar they don't have any basic fundamental rights like, right to marry, right to free movement and higher education, there was no employment opportunity and they need to take permission if they want to travel beyond their place of stay. They were discriminated, abused and was the most neglected community by the government." We have our own language and culture but that doesn't mean we are not the native of Myanmar. Our ancestors settled in this region many generations ago." he added.

It was almost 4'O clock, I was moving around to get some good pictures and Asad was also accompanying me. He told me, he wanted to become an auto-driver as the autos and cars fascinate him and also he can travel without paying. When I was leaving, he whispered in my ear to come again and teach him how to use that "photo" he meant my camera. After meeting them, I didn't feel even for a second that they belong to some other country or they are stateless people. I researched more about their history and existence and Ipshita Sengupta helped me a lot by giving an insight into the topic. Some people think they are terrorists, some call them Rohingyas Muslims and the locals call them as "Varma waale".

Who are these Rohingyas?

In Myanmar, about 88-90% of the population are Buddhists and a small minority of other ethnic groups who generally suffer discrimination and one such ethnic group are the Rohingyas, who are the stateless Muslim minority in Myanmar. They have been denied Burmese citizenship since the 1982 Burmese nationality law was enacted. The Rohingyas describe themselves as descendants of Arab traders who settled in the region of Rakhine state many years ago. The government of Myanmar describes them as illegal immigrants from Bangladesh. Nisma Khatun, who is now 65 told me about her painful journey from Myanmar to India, “We walked for days through jungles and high lands and we had to suffer a lot during the travel period especially across the Bay of Bengal. My family was hungry and tired. I am an old woman, I have my own age related problems. I was crying in pain and hunger. We left everything in Varma, they burnt our houses and took my elder son away in front of my eyes.” She showed me the marks of her wounds that still terrifies her.

She still can’t sleep properly at night and misses her dispersed family members. She is here with her younger son, who works as a rag picker. “I feel safe in India. People co-operate with us but we don’t have any identity papers. The place where I was born and brought up, I want to die there only. I feel alone here but my son and I are safe here.” She introduced me to the other families too whose conditions were miserable and they don’t have enough clothes to even cover their body in the chilling winters of Delhi. I clicked her picture and all of a sudden she smiled at me. Her old and experienced eyes have seen enough of violence and the struggle to live peacefully. While I was there, I could see the population of women and children were more vulnerable as compared to the men. Some of the women suffer from various medical problems as they do not have proper access to toilets and washrooms. And older women have their own issues. They don’t have money to go and see a doctor. They are uneducated and shy to speak about their grievous journey. They are still scared of people and are confused about whom they should trust. None of them even care about what political leaders had said about them. They just want a simple life.

Nadeem Farhad, a 24-years-old boy, says, "I don't know what Allah has beheld for us. I can't remember spending a single day without being scared for my life in Myanmar even when I was a kid. Rising sun raises the hopes but for us, rising sun terrifies us the most. I am 24 and I feel like I have seen everything. I had lost all hope when I lost my family. I came all alone in India. People didn't welcome us here either but this place is better than Myanmar. I can sleep peacefully and I can work for my living. Even in my nightmare, I will never go back to the country where I lost my family and all my hopes and dreams." After listening to them I feel like I am the luckiest person on earth. I have everything and I have access to all the basic rights. Just think about them, how miserable they are. They don't even have their own country. Their own people attacked them which made them flee from Myanmar. I saw Asad coming from school, like any other kid he was laughing, telling some of his tales, walking carefree. He is only five and unlike other kids, he has his own dreams but even he doesn't know what might happen next. But right now the only thing he is worried about is his homework. He came running to me and asked me, " Aapi, your photo?" I couldn't deny him and gave him my camera. I taught him how to click a picture and clicked a really nice picture of mine. I could see how happy he was. As if he had conquered the world. Rahim, who is Asad's elder brother says, "I have seen with my eyes how they (Myanmar military) burnt my house. I was not allowed to even study. I want to study and here I go to school." Ipshita Sengupta informed me that, "India never signed any international treaty regarding treating about this refugees. But if we look back, India has always opened its gates for the refugees. But this time, the government had not made any comments regarding this.

I went again to see them and take better pictures as well. It was 12 noon and like many homeless communities they were also sitting under the sun, kids were playing and everyone was busy with their own work. They might look normal and smile outside but even they are not sure where they will be in the next two years. Kids like Asad, will complete their education? The Rohingya refugee crisis was one of the most covered topics in the media in the year 2017. It's not easy to leave a place without knowing the destination. The children who are born in the camps, what about them? What identity will they get? Sorry, I should ask whether they will have an identity of their own or they also have to struggle for their rights and citizenship? They do have names but now Rohingya Muslim has become their only identity.