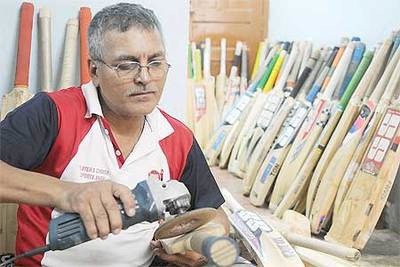 In a cricket crazy country like India, where cricketers are worshipped and boundaries- the fours and sixes are always in demand and to meet the supply we have often seen the boundary ropes being brought in. But what if the wooden stick in the hand of your demi-god is damaged? Who do they run to? 58-year-old Ram Bhandari, the trusted bat doctor of India has been repairing bats for more than 20 years now and has a small workshop in Uttarahalli. The list of his clients includes Sachin Tendulkar, Rahul Dravid, Saurav Ganguly, MS Dhoni, Virat Kohli, Suresh Raina and more. Bhandari also has international clients in the form of Ricky Ponting, Chris Gayle, Matthew Hayden and Kieron Pollard to name a few. In an interaction with NSoJ Student Journalist Manan Vaya, Bhandari opens up about his life, how he came into this profession and the art of mending bats.

When did you start repairing bats and how you came into the limelight?

I moved to Bengaluru from Bihar in 1979 but repairing bats was not something that just clicked directly for me. I have worked as a stunt master in three-four movies and done many odd jobs. I learned carpentry from my grandfather and initially, I started repairing bats of junior cricketers and, as my work started getting appreciated, I moved on to the bats of Ranji Trophy cricketers. One cricketer who was impressed by my work was Rahul Dravid.

It was Rahul Dravid who introduced Sourav and Sachin to me. Today a generation has passed by with the Under 19 star Sarfaraz Khan being the latest entrant to approach me, it is my passion for the job that keeps me going, and I feel just as if I have started today.

How do you go about making changes in the bat of a particular batsman?

See playing gully cricket has helped me in this. Each batsman has his way of doing the business; some wants the bat to be light while others heavy. It mostly depends on their footwork, I watch them play and come up with suggestions accordingly. It also depends on the quality and nature of the wood of the willow. Someone like Viru (Sehwag) will prefer a lightweight bat. Likewise, I suggested Sachin Tendulkar- reduce the weight of his bat from 1350 gms to 1250 gms after his tennis elbow and it worked.

At this time, any cricketing conversation is incomplete without talking about Virat Kohli. When did you start working with him?

From his Under 19 days when he used to play in National Cricket Academy, he used to keep on telling me he wants so and so changes in his bat. He plays with the thinnest handle you will find any cricketer with and the weight of his bat is 1150 gms. He is very particular about the size, the handle and weight and even looks if it is okay for every shot in the book. He is very sharp and his on-field heroics every other day is commendable.

Has been there any instance of wherein you had to repair the bat overnight? Have you come across any such kind of emergency?

I have been mending bats for the Royal Challengers Bangalore from the very first season. The last home game of Royal Challengers Bangalore against the Rajasthan Royals was at four in the evening, I received four bats of RCB players at nine in the evening a day before the game. I worked till one am, then came at six in the morning, did the final touching and send it immediately.

What do you think of the art of bat repairing?

Bat repairing can't be taught to anyone. It is a skill which one can master only through practice. My younger son Dasharath, who manages the shop now has over the period of time developed an interest in mastering this art, I often tell him the more you do, the more you get better at it.