It was the first peacetime military alliance the United States entered into outside of the western hemisphere. 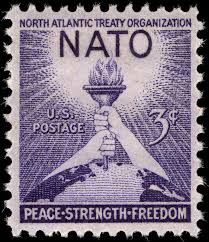 It was the first peacetime military alliance the United States entered into outside of the western hemisphere.

The North Atlantic Treaty Organization was created in 1949 by the United States, Canada, and several Western European nations to provide collective security against the Soviet Union. NATO was the first peacetime military alliance the United States entered into outside the Western Hemisphere. After the destruction caused by the Second World War, Europe struggled to rebuild their economies and ensure their security. The United States viewed an economically strong, rearmed, and integrated Europe as vital to the prevention of communist expansion across the continent. As a result, Secretary of State George Marshall proposed a program of large-scale economic aid to Europe. The resulting European Recovery Program, not only facilitated European economic integration but promoted the idea of shared interests and cooperation between the United States and Europe

Located at the finest locations in New York, it has 13.4 lakh square feet of office space. .

The original World Trade centre was a complex of seven buildings in Lower Manhattan, New York City. It featured the landmark Twin Towers, which opened on April 4, 1973, and were destroyed in 2001 during the September 11 attacks. It was located in the finest location of New York, and contained 13.4 lakh sq ft of office space. After the destruction, it took about eight months for the cleaning of the debris. But it took about a decade for its reconstruction.

MaYun is professionally knowns as Jack Ma is a Chinese businessman, investor and philanthropist.

He is the Co-founder and executive chairman of Alibaba Group, a multinational company

In the year 2017, he was ranked 2nd in the annual “World ‘s 50 Greatest Leaders “list by Fortune Magazine

In the year 1998 – 1999 Ma Yun headed an information technology company established by the China International Electronic Commerce Center, a Department of Ministry of Foreign Trade and Economic Cooperation. In the year 2000, Alibaba won a total of $ 25 million-dollar foreign venture capital investment. The program aimed to improve the domestic E-Commerce market of Chinese enterprise. Ma Yun is in talks with the US President Donald Trump regarding the creation of 1 million American jobs in the next five years.