The topping came in the form of spicy, green panipuri water added to each of the puris 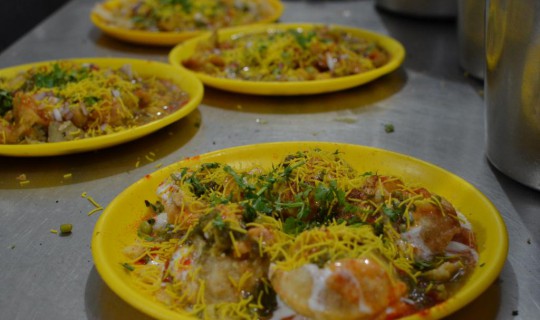 Puchka, Panipuri, Golgappe, whatever name you know it by you cannot deny that this is a treat loved by people throughout the nation. Kolkata Chaats in Sahakar Nagar is one such little outlet known for its spicy and tangy chaats. It’s a small place located at one end of the road leading to Sahakar Nagar from Kodigehalli Main Road. Our food review team tried the panipuris as they are well known in the locality. We watched with our mouths watering as the panipuri wala expertly used his plastic glove-covered nails to make a line of panipuris which were then filled with fresh potato filling. He then added his array of spices including chilli powder and other flavors.

The topping came in the form of spicy, green panipuri water added to each of the puris. The result was a delectable panipuri made with the right amount of spices. Though it may have been a little too spicy because the end result was that our reviewer Sanjana’s nose began to run from the fiery taste of the panipuris. We chased down our panipuris with three delightful sukha puris which were made with the same potato stuffing, a dash of lime juice, and some more ingredients from the panipuri wala’s stock of spices. We washed down our panipuri with a glass of water each and walked away with our noses running, but our hearts full of childish glee at having eaten some good panipuri.

After the panipuri, our reviewer Sanjana insisted on trying Bhelpuri which according to her is the second official snack in order after puchkas. The savoury delight was made by mixing mamras, carrot, peanuts, tangy and sweet salts, papdi and a mixture of roasted masala and chili. It was tasty to the core and it felt heavenly to drink maza at the end. Not only pani-puri and bhelpuri but this place is also well known for, dahi-puri, samosa chaat, masala-puri, vadapao and the best part is you can have it anytime even after your lunch or dinner. This place is definitely a must try!

One needs to hold their horses for their chance to come, as people are not done with one plate of the Puchkas.

There are no seating spaces, but the popularity of the little jaunt is witnessed by the hoard of people who are almost always there during the day, waiting in the wings to get a taste of one of their many well-known dishes.

Sanjana Surbhi, Manan Vaya and Nimeshika Jayachandran reviewed the place and paid for the meals.